in Tips and Tricks
0

When I first started fishing in the 1980s, baitcasting reels were mysterious and a little bit daunting. The old-timers told us tales of monstrous “bird’s nests” and “backlashes,” which they euphemized as “professional overruns.”

Because the baitcasting reels’ spools spin freely, unlike that of a spinning reel, any difference in speed between the spool and the line leaving it can result in a massive tangle. Furthermore, they were only suited for casting comparatively heavy lures at that time. So the choice of baitcaster versus spinning reel often boiled down to just lure size.

Fortunately, the old-timers’ tales and warnings proved to be a bit overblown. Yes, backlashes occurred, but all types of fishing reels have their own sets of problems. Today, even mid-priced baitcasting reels are better than the state-of-the-art models from when I started and the best fishing reels are works of art. Like all quality fishing gear, they make you a more efficient angler.

What Has Changed Over the Years in Baitcasting Reels

Why are today’s baitcasting reels so much better than the ones of yesteryear? It’s not just a matter of better components. Reels have become more specialized, where appropriate, and a better fit for each individual angler’s needs.

First, historically the handle on most baitcasters was on the right side. This differs from most spinning reels, where the handle can be switched from one side to the other. That meant that the typical right-handed angler would have to cast with their dominant (right) arm, and then switch the rod to the other hand to start the retrieve. For lures that required immediate retrievals, this was a huge disadvantage. Similarly, if a bass ate the lure on the way down, it could often expel it before the angler could feel the strike.

Second, there is now a far greater range of gear ratios, from super-slow all the way up to a blazing 10:1. A generation ago, most baitcasting reels were in the 5:1 to 6:1 range.

Today’s baitcasting reels, even saltwater baitcasters, are made of varying materials. They are typically much lighter than their predecessors, even if they feature more bearings. This allows them to balance with today’s increasingly lightweight baitcasting rods.

Finally, there are plenty of baitcasting reels that serve a wide variety of purposes and applications. But there are specialty reels made for techniques like “Bait Finesse” and others reserved for specific line types, such as braid.

What to Look For in a Baitcasting Reel

First and foremost, you want a baitcasting reel that fits your hand properly. While there are still some round-bodied reels on the market, most of today’s offerings have a low profile which allows them to be palmed.

Go to the fishing reel counter of your local Walmart or tackle store and handle a few. Bring the baitcasting rod that you’re likely to use it with to check for good balance. Feel the handle length, shape, and composition of the knobs to see if they’ll leave blisters or otherwise be uncomfortable. Remember, this is a fishing tool and as such, it should be ergonomic.

Second, consider retrieval speed. For tactics where the reel manipulates the lure, like spinnerbaits and crankbaits, you generally want something in the 5:1 to 7:1 range. For lures that you manipulate with the rod and then reel in the slack, or where you’ll be making short pitches, go with a faster reel so that you can make more casts and not waste time in barren areas.

Finally, consider the components. More bearings and better drag systems cost money. If you’ll need them, buy the best you can get to avoid replacing the reel after limited use. A single manufacturer may have multiple reels with similar frames at wildly different price points. Assess the reason for those differences and whether it makes sense for you to spend more or less on a given reel.

Abu has been a leader in producing some of the best fishing reels in the world for decades. They were at the front of the pack when it came to escalating the gear ratio arms race, setting the standard at 7:9:1 before hitting 9:1 and now 10:1. The Revo Rocket weighs a mere 7.3 ounces, yet it packs in 10 HPCR (High Performance Corrosion Resistant) bearings plus a roller bearing. That keeps it smooth at any speed without sacrificing the torque needed to winch on big fish.

The speed, combined with the reel’s ability to cast exceptionally light lures without risk of backlashing, makes it a great choice for pitching Senkos and Texas Rigs. It also serves well for casting light topwater baits, even into the wind. The Revo Rocket is available in otherwise-equally-outfitted left hand and right hand retrieve versions. Both are red to connote their blazing fast speed. 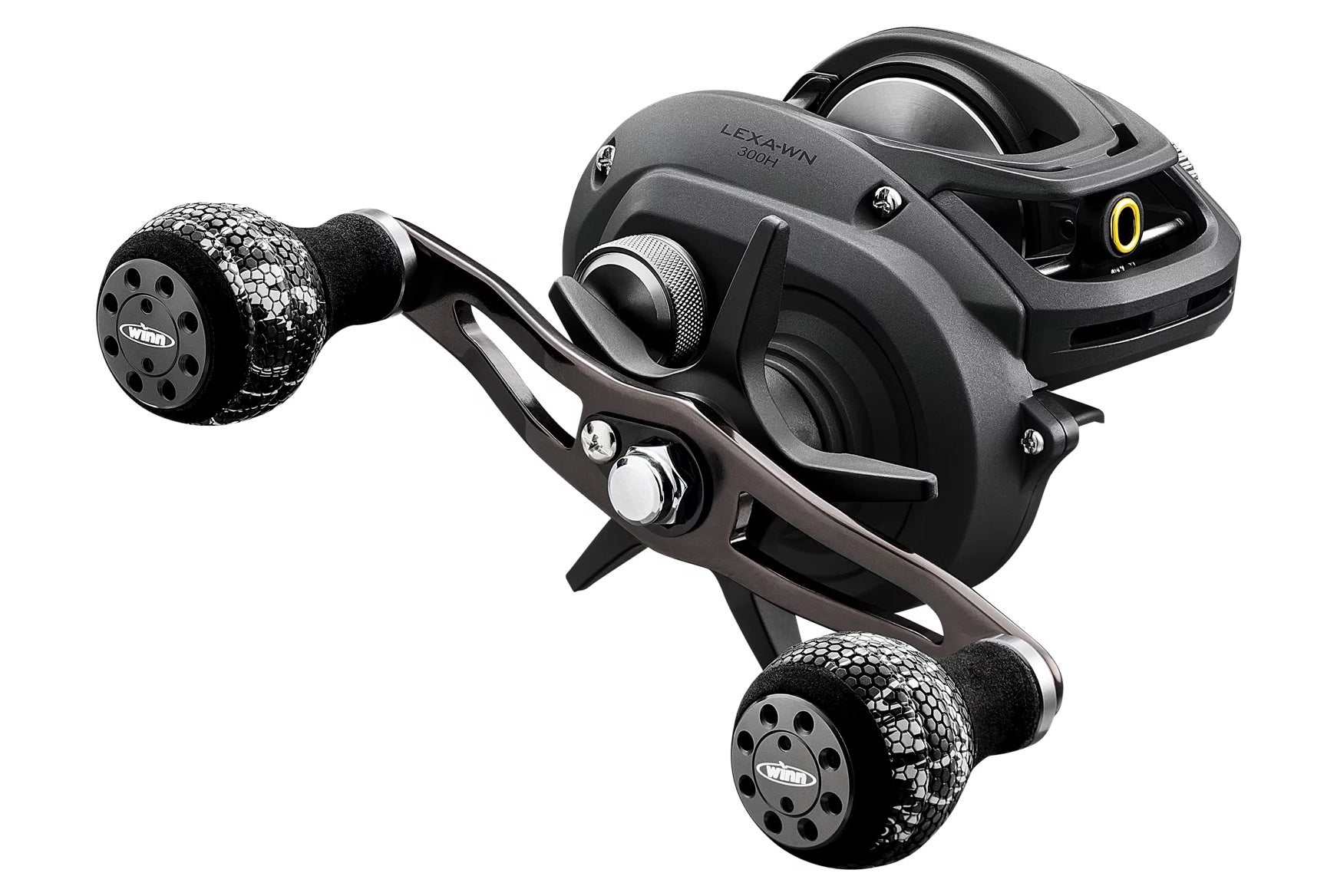 Daiwa reels have a devoted following among swimbait and glide bait enthusiasts throughout the world. Their Lexa series incorporates the “T-shaped” line guide that allows the line to flow smoothly. This maximizes distance, backlashes, and prevents sudden lurches that may cause your line to seize up and snap.

The Daiwa Lexa, which comes in 6.3:1, 7:1, and 8:1 gear ratios (although only the middle speed is represented in a left hand retrieve), is notable for its single-knob 70mm adjustable power handle. This handle allows anglers to execute precise quarter and half-turns to eke every bit of life out of their oversized lures. This eight-ball-bearing tool has the heft and construction to handle the largemouth of a lifetime or the massive striper that happens to wander into your strike zone. 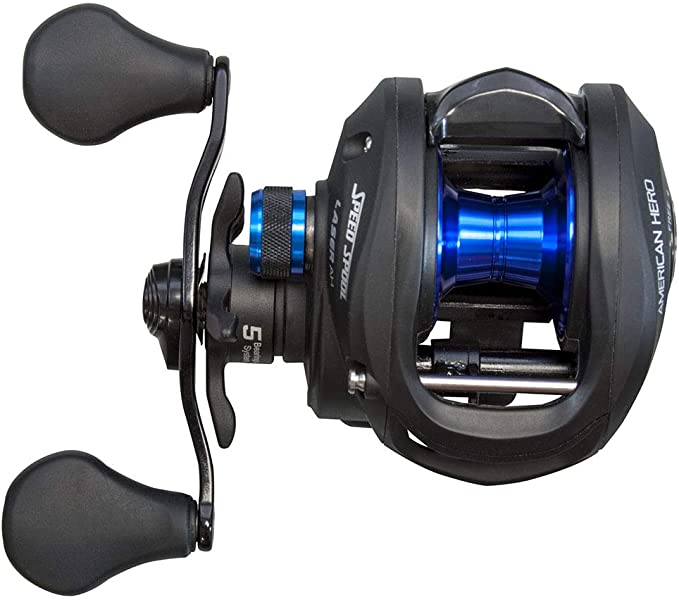 Lew’s venerable brand of baitcasting reels claimed a large share of the market since being brought back to life about a decade ago. This is due to their versatility, durability, and the company’s values. For only $64.99, this budget fishing reel is anything but bare bones.

All three models—right hand retrieve in 6.4:1 and 7.1:1, and a left hand retrieve in 6.4:1—weigh a mere 7.2 ounces. Each has a total of five bearings. The reel features a comfortable bowed handle and two paddle knobs. This combo will fit a wide range of hand sizes from little kids up to full-blown Bubbas. Whether you’re just starting out or need to develop a 10-reel arsenal, this is a budget-minded option that still delivers. Making it even better, a portion of the profits from every reel goes to support U.S. military veterans. 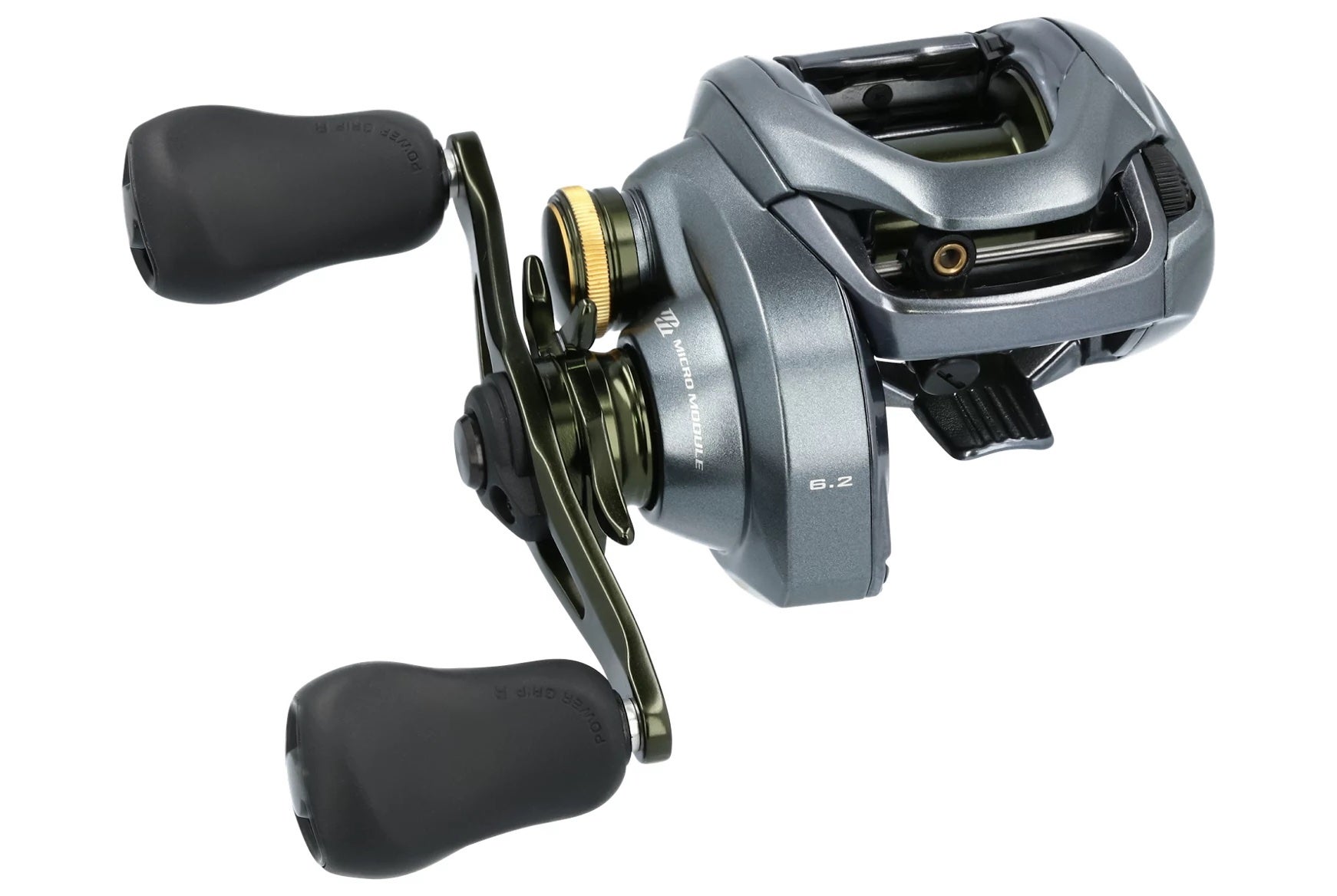 With only minimal angler input, a microcomputer assesses spool speed every 1/1000 of a second to adjust for lure weight and wind. While it doesn’t eliminate backlashes completely, they occur far less frequently. That means you can throw light lures directly into a headwind without the fear of blowing up your entire spool. Once you get used to the distinctive “whir” while casting, you’ll find the Shimano Curado DC indispensable. It comes in 6.2:1, 7.4:1, and 8.5:1 gear ratios, all of them available in both left and right handed retrieves.

The Baitcaster That’s Different Than All the Rest: 13 Fishing Concept “Z3” Casting Reel 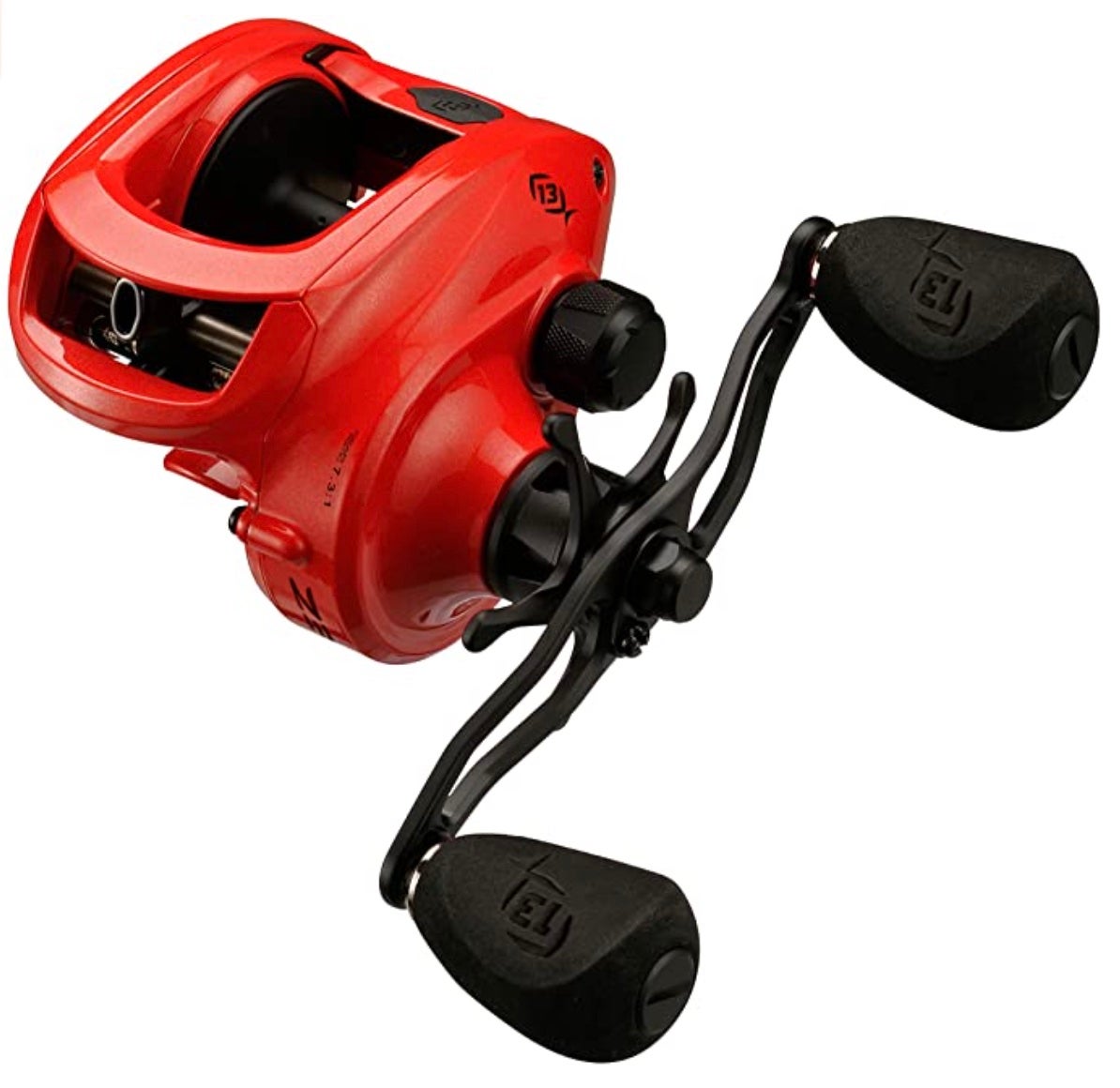 Other companies have been touting an increased number of bearings as the key to smoothness and performance in their baitcasting reels. 13 Fishing threw out that playbook by eliminating bearings altogether.

They claim that they’ve replaced them with a “space age material” that does the job of maintaining performance even better. Debris and corrosion are no longer an issue, and that’s enhanced by the Ocean Armor 2 saltwater protection process. The fishing reel features EVA knobs for comfort and a remarkable 30 pounds of drag. Both left and right hand retrieve models are available with 7.3:1 gear ratios.

Q: When is baitcasting better than spinning?

If you’re not an experienced caster, you may want to err toward spinning when casting into a wind or using lighter lures, but that’s no longer a hard and fast rule. Baitcasting reels to allow you to make more casts in the course of a day because you disengage the spool with a press of your thumb, rather than having to flip a bail. Most serious flippers and pitchers also use baitcasting gear because you can re-engage the reel more quickly, allowing you to set the hook on a fish that eats your lure before it hits the bottom.

Q: What baitcasters do the pros use?

Professional bass anglers, who typically put their fishing gear through torture tests, want the best reels they can get. They want to be sure that their reels won’t fail in tournament competition. Most use a wide range of retrieve speeds, although they vary in their particular preferences.

For many years, Shimano, Daiwa, Abu-Garcia, and Quantum were the most frequently cited among tournament winners, but over the past decade Lew’s has come on strong and taken over a wide swath of the market. Now there are other brands including 13 Fishing, KastKing, Ardent, Favorite, Okuma, and Duckett making waves in this market. Even brands that have historically been saltwater-focused like Penn have viable tools for the bass world.

Q: What is the best baitcasting reel on the market?

The best baitcasting reel on the market depends on your particular needs. While there are bespoke and highly-customized versions, many of them from the Japanese market, at over $500 (and indeed, many of them start at over $1,000 in limited runs), you should be able to get a durable and tournament-ready model for less than $200.

Go to the reel counter of your local store and handle them all to see which one fits you the best. Ask other anglers in your area which they use and why. There’s no single right answer, and ultimately your choice should be determined by the features that matter most to you, as well as your budget.

Today’s reels are far lighter than their predecessors, with many in the 6 to 7-ounce range. They are more technologically advanced, too. Nevertheless, their overall function hasn’t changed much since the turn of the century. The best baitcasters have tight tolerances, little slop, and balance well with a wide range of rod choices. There’s no reason to be afraid of getting your first one, or of building a quiver full of specialized tools. The answer to the question of “What’s the best baitcasting reel for any particular purpose” has a wide range of answers.

How to Read the Weather in a Survival Situation

The Best Lures and Baits for Crappie Fishing

The Best Lures and Baits for Crappie Fishing